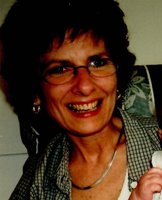 Jeanie was a 1971 graduate of Olean High School and graduated from Fredonia State University in 1975 with a bachelor’s degree in English Literature.  She also attended Clarion University for Library Science.

Jeanie was a member of the Port Allegany Community Theater, PSER, and was a devoted member of St. Joseph’s Episcopal Church of Port Allegany. She was a cat lover and adored her family and friends.  Jeanie was an angel on Earth and touched so many people through her incredible spirit and smile.  She battled Multiple Sclerosis for several years but never allowed her disability to hinder her spirit and optimism on life. Her wit, strength, and humor were heroic and idolized by those who knew her.

In addition to her mother, “Bernie” Eisenhart of Allegany, NY, Jeanie is survived by:

She was preceded in death by her father, William M. Eisenhart.

Due to COVID-19 restrictions, visitation and funeral services will be held privately with the family on Saturday, October 10, 2020. Burial will be in the Fairview Cemetery, Port Allegany.

Condolences can be sent to Kelly Graves and Jason Sewell at 221 Chestnut Street, Port Allegany, PA 16743.