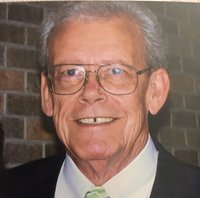 Jim was born December 10, 1942 in Coudersport, PA, and spent most of his early life in Port Allegany, PA graduating from Port Allegany High School with the class of 1960.  He played trumpet in the high school band, sang in the choir, acted in school plays, participated in gymnastic competitions, and was voted “Best Personality” of his high school senior class.

Jim worked at the Pierce Glass Bottle Company in Port Allegany for six years, then left for Florida to pursue a career in music.  He was a talented musician and performed as a professional jazz pianist.  He participated with the USO tour, traveling to Thailand among other destinations. Jim was also employed by England Brothers Construction while in Florida. Later, he continued his career at the glass bottle plant, was transferred to the Illinois plant as QC manager, and eventually to the plant in Simsboro, LA as a customer service representative. Jim enjoyed close relationships with his customers at McIlhenny, Maxwell House, Pace and many others.  He retired in 2007 after 36 years of service with Saint Gobain.  In his retirement, Jim continued to entertain on the piano, albeit in more intimate venues (mostly living rooms) playing to smaller audiences (mostly loved ones) at times with his son Jer on drums, and was able to devote time to woodworking projects, his stamp collection, a model railroad and spending time with family.  He was a member of First Baptist Church of Ruston for 24 years.

He is preceded in death by his parents Grace and Rudy Anderson and his eldest son, Joel Anderson.

Jim (a.k.a. The Lawn Ranger) enjoyed working in his yard, was always up for a game of cards (3-13), interjected wit when you’d least expect it, and had a grandfather’s knack for calming fussy babies.  He appreciated simple things- his little dog, Sophie, baking rhubarb crisp and chocolate chip cookies, turning leftover turkey into turkey noodle soup, working on a jigsaw puzzle, and watching football or golf.  He knew the value in simply sitting and visiting with people he cared about, and he did a lot of that.

Jim loved his Lord and savior Jesus Christ.  Jesus stepped into his life and saved him in 1991.  He knew that his salvation was not due to his own efforts, but because of the gracious sacrifice of Christ through His death on the cross. Jim was often found at the piano worshiping His Lord with his unique and heartfelt style which will be sorely missed by his family and friends.

A service will be held at Sartwell Creek Union Church of Port Allegany, PA at 2pm Saturday, November 14th,  Burial will be in  Fairview Cemetery in Port Allegany.  A memorial service and celebration of Jim’s life will also be held at First Baptist Church of Ruston in December.  In lieu of flowers, please make donations to the Children’s Building Fund at First Baptist Church of Ruston. Due to Covid-19 restrictions, Masks and social distancing should be folloeed.

“Trust in the Lord with all of your heart, and do not lean on your own understanding.  In all your ways acknowledge him, and he will make straight your paths.”  - Proverbs 3:5-6