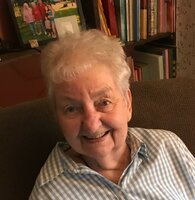 Smethport - Jacqueline B. Olson Leet Stanley, 93, of Smethport, passed away peacefully in her home surrounded by her family on Tuesday (September 21, 2021).

Jacqueline was a graduate of Smethport High School.  She worked in several places over the years, but ultimately worked as head cashier for Costa’s Supermarket in Smethport, retiring in 1989.

Jacqueline was a member of the East Smethport United Christian Church, was an avid gardener, an excellent quilter and cook.  She was a devoted and loving mother, grandmother and great-grandmother.

In addition to her husband, Harry Stanley, she is survived by:

One nephew:  Carl Olson of Eldred

In addition to Jacqueline’s parents and first husband, she was preceded in death by a son, Carl E. Leet, one great-granddaughter, Mia Jacqueline Linderman, and one brother, Peter Olson.

Visitation will be held on Thursday from 4-6 PM at the East Smethport United Christian Church, where funeral services will begin at 6 PM with the Rev. Allen Young, pastor, officiating.  Burial will be in Fairmount Cemetery, Farmers Valley.