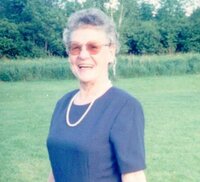 Erma was a graduate of Otto Township High School.  She was the payroll and office manager at the former Jaguar Clothing Company of Smethport, PA.

In addition to her parents and husband, she was preceded in death by two sons, Richard W. Phillips and Mitchell D. Phillips, three brothers and one sister.

Following Erma’s wishes, there will be no visitation.  Private funeral services will be held on Wednesday, Oct. 13, at 11 AM at the Hartle-Tarbox Funeral Homes, Inc., 2 Bank St., Smethport.