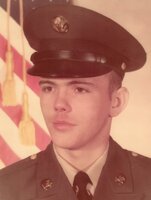 He was born November 29,1955 in Coudersport, the son of Eugene Alton Yentzer and Arda DeNio Herbstritt.

Mr. Yentzer attended Austin Schools and was a veteran of the US Army serving during the Vietnam war.

Mr. Yentzer was a truck driver, employed by Campbell Trucking for many years. He was a member of the American Legion Frank Burt Post of Port Allegany. He was an avid hunter and fisherman and enjoyed spending time with his family and cruzin' around town with his dog Gizmo.

Several step-bothers and step-sisters and many nieces and nephews.

He was preceded in death by his mother and nephew Eugene (Gump) Yentzer, III.

There will be no visitation. A Celebration of Life will be held at a later time and date to be announced.

Memorials may be made to VA Hospital in Bath, NY.  Condolences can be sent to Jenny Yentzer, 79 Mapleview Lane, Coudersport, PA 16915 or online condolences may be made at  http://www.hartle-tarboxfuneralhomes.com/