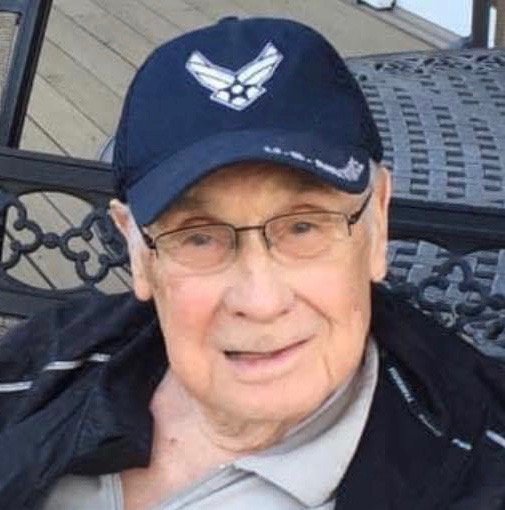 Please share a memory of Jack to include in a keepsake book for family and friends.
View Tribute Book

Born May 10, 1923 in , he was the son of the late Thomas Orlo Lent and Edith Banning Lent.  He was predeceased by his 3 siblings, Roberta Campbell of , Hobert Lent of , , and Janie Lent of

Jack served in the US Army Air Force in World War II from 1943-1946 and was based in Guam as a mechanic on the Boeing B-29 Superfortress; eventually becoming a staff sergeant in just 3 years.  Jack was blessed with an amazing memory.  Up till his death he was still able to recall the number of cylinders and the horsepower of each engine, as well as the exact length of the propellers.  Upon his return from the military, Jack resumed his career with Pennzoil until retirement.

Jack met his wife, Dorothy Jean Haberly, at a roller skating rink in , and they were married on New Years Day in 1947 at St. Stephens Episcopal Church in .  They built their first home on in Smethport, where they raised their 9 children; Jack Orlo Lent Jr. of Salamanca, NY, Robert Joseph Lent of Olean, NY, Linda Mae McKeirnan of Hickory, NC, James Raymond Lent of Smethport, PA, Thomas Ray Lent of Warren, PA, Susan Marie Lent of Olean, NY, Mark Raymond Lent of Portville, NY, LuAnne Lent Mast of Townsend, DE, and Jeffery Lee Lent of Ludlow, PA.  Jack was predeceased by his wife Dorothy Jean in 2002 and his daughter Susan Marie in 2009.  Jack was a grandfather to 24 grandchildren, and had several great and great-great grandchildren.

In addition to his long career with Pennzoil, Jack also worked as a radio and tv repairman, taxi driver, landlord, and business owner.  He and Dorothy owned The Smethport Bowling Alley from 1956-1969 and The Smethport Drive-In (“Tastee Freeze”) from 1969-1977.

Jack enjoyed golf, swimming, downhill and cross-country skiing, baseball, dancing, roller skating, boating, camping, water skiing, jet skiing, snowmobiling, four wheeling, motorcycling, and hunting.  Most of these activities he still enjoyed well into his 80s.   He never took any medication, but instead took a teaspoon of honey with cinnamon and drank vinegar and water daily.

Memorials, if desired, may be made to Sena Kean Manor, 17083 Rt. 6, Smethport, PA  16749.  Online condolences may be made at www.hartle-tarboxfuneralhomes.com.

A Memorial Tree was planted for Jack
We are deeply sorry for your loss ~ the staff at Hartle-Tarbox Funeral Homes, Inc. -Smethport
Join in honoring their life - plant a memorial tree
Online Memory & Photo Sharing Event
Online Event
About this Event

Share Your Memory of
Jack
Upload Your Memory View All Memories
Be the first to upload a memory!
Share A Memory
Plant a Tree