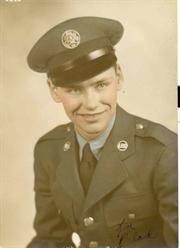 Please share a memory of Claud to include in a keepsake book for family and friends.
View Tribute Book
Smethport--Claud E. Knight, 76, formerly of Roulette, PA, died Oct. 26, 2009 at Lakeview Senior Care and Living Center, after a prolonged illness. Born September 19, 1933, in Roulette, PA, he was the son of Claude and Devona Wetmore Knight. On December 29, 1956, in Coudersport, PA, he married Donna Stone who preceded him in death on March 27, 2005. Claud was a veteran of the U.S. Air Force serving during the Korean War, and was a lifelong member of the American Legion. He worked for Pure Carbon Company for more than 35 years, prior to his retirement. He served many years in the Roulette Volunteer Fire Dept. He is remembered as the Captain of the Ambulance Service and for the passion he brought to those duties as an EMT and instructor of many of the local volunteers. As a young man, he played the trombone and sang in the chorus. Over the years he continued his love of music by teaching himself to play the organ. Claud enjoyed restoring and showing classic cars, spending many hours preparing for and attending shows with his wife Donna. They were active members of the Street Machines Car Club, helping organize and participating in local shows. He is survived by a son, Claud (Maria) Knight of Colorado Springs, CO, two daughters, Debra (Lee) Lincoln of Smethport, PA, and Barbara (Nick) Steele of Haymarket, VA, along with several grandchildren and great grandchildren. He is also survived by a brother, Keith Knight of Andover, NY, and several nieces and nephews In addition to his parents and wife, Claud was predeceased by two sons, Gregory and Charles, and his sister, Patricia Martz. Visitation will be held on Friday, Oct. 30, from 6 to 8 p.m. at the Hartle-Tarbox Funeral Homes, Inc, Port Allegany, PA, where funeral and committal services will be held on Saturday, Oct. 31, at 1P.M., with the Rev. H.D. Youngblood, officiating. Military Honors will be accorded by the Port Allegany Honor Guard. Burial will be in Fishing Creek Cemetery, Roulette, PA. Memorials may be made to Potter County Hospice or a charity of the donor's choice. Online condolences can be made at www.hartle-tarboxfuneralhomes.com. Arrangements are under the direction of the Hartle-Tarbox Funeral Homes, Inc., Port Allegany.

Share Your Memory of
Claud
Upload Your Memory View All Memories
Be the first to upload a memory!
Share A Memory
Plant a Tree