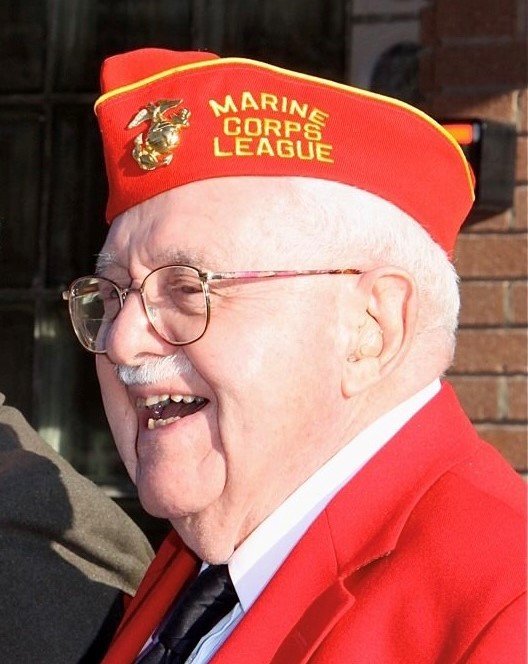 Please share a memory of Donald to include in a keepsake book for family and friends.
View Tribute Book

Donald Earl Kanally, 97, of Bradford, formerly of Port Allegany, passed away Sunday, March 21, 2021, as a natural consequence of his aging.

He was born at home on Chestnut St., in Port Allegany, PA, on August 5, 1923, with the Dr. Dwight C. Hanna in attendance. He was the only child of Earl C. and Mildred Scott Kanally. In his early teens, given a mutually agreeable opportunity, he chose to live with his Aunt and Uncle, Emma Scott Fleming and George Fleming, who remained in "Ioco parentis" for the rest of their lives.

Donald, nicknamed “Dek” at an early age, was a 1941 graduate of Port Allegany High School. He attended Grove City College, where he enlisted in the United States Marine Corps Reserve in 1942. He remained in the Reserve until 1952, serving on active duty during and after World War II in the Pacific and in China with the 6th Marine Division and 3rd Marine Brigade. During the Korean Conflict, he was assigned to duty as combat cargo officer aboard the U.S.S. Chilton-APA 138, with the Sixth Fleet.

After discharge from active duty and selected for promotion to the rank of Captain in 1952, he resigned his commission in the Reserve and spent full time in the family insurance business, the Fleming-Kanally
Agency.

A graduate of Bucknell University in 1944, with a Bachelor of Science Degree in Commerce and Finance, Dek earned his MBA from the Wharton Graduate Division of the University of Pennsylvania,
Philadelphia, in 1948.

In 1949, in Erie, PA he was married to Ann Marie Forssell. She and their two sons, David of Coppell, TX, and Kevin of Derrick City, survive, as does a daughter in law, Cheryl McLaughlin Kanally; one granddaughter, Lauren; three grandsons, Brian, Eric, and Jamos. He is also survived by extended family members, Sally, Terry, and Quentin Claypool.

In 1978, he was awarded the professional designations Chartered Property and Casualty Underwriter and Certified Insurance Counselor. He retired in 1987.

He was an elder in the First Presbyterian Church of Port Allegany, served for a time as treasurer, and periodically, as a teacher in the Sunday School. His community activities include service on the Port
Allegany School Board, Port Allegany Borough Council, the Chamber of Commerce, Economic Development Corp., Exchange Club, Rotary Club, Community Park Association, and the Area Recreation
Authority. He was a water safety instructor in the late 50's and early 60's at the Port Community Pool, where he learned to swim about 30 years earlier. He was appointed to the Advisory Board of Citizens
Trust Company of Coudersport, PA when the bank opened its branch in Port Allegany. His Masonic affiliations for more than sixty years were Liberty Lodge and Arnold Chapter in Port Allegany, the Coudersport Consistory, and Zem Zem Shrine in Erie, PA. He was a member of the Loyal Order of Moose Lodge #460, Port Allegany, and a life member of Star Hose Company #1, Port Allegany.

He was an active participant in the Port Allegany Honor Guard. He held life membership in the American Legion; Frank Burt Post #258, Port Allegany, the VFW Post #6391; Port Allegany, and the Marine Corps League. He was a charter member of the Bob Swanson Detachment #1102 of Mt. Jewett.

Dek's interests were diverse. Camping, fishing from canoe or outboard on Chautaqua Lake, or on Quebec's Kipawa Lake District, taking long walks, woodworking, and rabbit and deer hunting with his son, Kevin, all energized him. To relax, he chose amateur photography, reading, listening to classical music, or attending antique and classic boat shows. After his retirement, he found opportunities for travel, a desire piqued by overseas duty. Destinations
included selected sites in Western Europe. He travelled to Alaska by way of the Alaskan Highway and to Churchill on the Hudson Bay by car and train. To celebrate their 80th and 50th birthdays in 2003, he and son David toured the Southwest-the states of the "Four Corners"-Mesa Verde, Navajo, Tribal Lands, Monument Valley, The Needle, Santa Fe, The Grand Canyon; in Texas-the mountains, the desert, and the river of Big Bend National Park.

In 2005, they participated in the Bicentennial at the Corps of Discovery by following the Lewis and Clark Trail from Great Falls, Montana to the Pacific.

An ecumenical memorial service will be held in the First Presbyterian Church of Port Allegany on Friday, March 26, 2021, at 2 PM, with the Rev. Garen Smith officiating. Military Honors will be accorded by the Port Allegany Honor Guard, and the Bob Swanson Detachment #1102 of the Marine Corps League at Fairview Cemetery on Saturday, March 27, 2021 at 2PM. Family and friends will be received, and refreshments served, immediately following services in the social area of the church. Interment will be in Fairview Cemetery, Port Allegany.

Memorials may be made to the First Presbyterian Church, 12 Church St. Port Allegany, PA 16743 or to the charity of the donor’s choice.  Online condolence may be made at www.hartle-tarboxfuneralhomes.com.  Arrangements are under the direction of the Hartle-Tarbox Funeral Homes, Inc., Port Allegany.

Share Your Memory of
Donald
Upload Your Memory View All Memories
Be the first to upload a memory!
Share A Memory
Plant a Tree