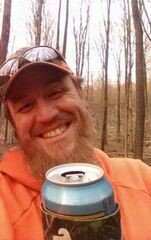 Obituary of Eugene A. Yentzer

Please share a memory of Eugene to include in a keepsake book for family and friends.
View Tribute Book

He was a graduate of Gatlinburg-Pittman High School, Gatlinburg, TN. He attended Penn-Tech College and received an Associate Degree in computer repair and networking. He was Supervisor/Roadmaster for Pleasant Valley Township of Potter County at the time of his diagnosis.

He was a member of the Sons of the American Legion of Port Allegany and the NRA.  He enjoyed hunting, fishing, and anything that could be done in the outdoors.

In addition to his wife and mother, he is survived by:

He was preceded in death by his stepfather, Jay Horvath and granddaughter, Trinity.

There will be no visitation.  A Celebration of Life will be held at a later date and time to be announced.

Memorials, if desired, may be made to the Port Allegany American Legion. Cards can be sent to Danielle Yentzer, 1102 Sartwell Creek Road, Port Allegany, PA 16743. Online condolences may be made at http://www.hartle-tarboxfuneralhomes.com

Share Your Memory of
Eugene
Upload Your Memory View All Memories
Be the first to upload a memory!
Share A Memory
Plant a Tree